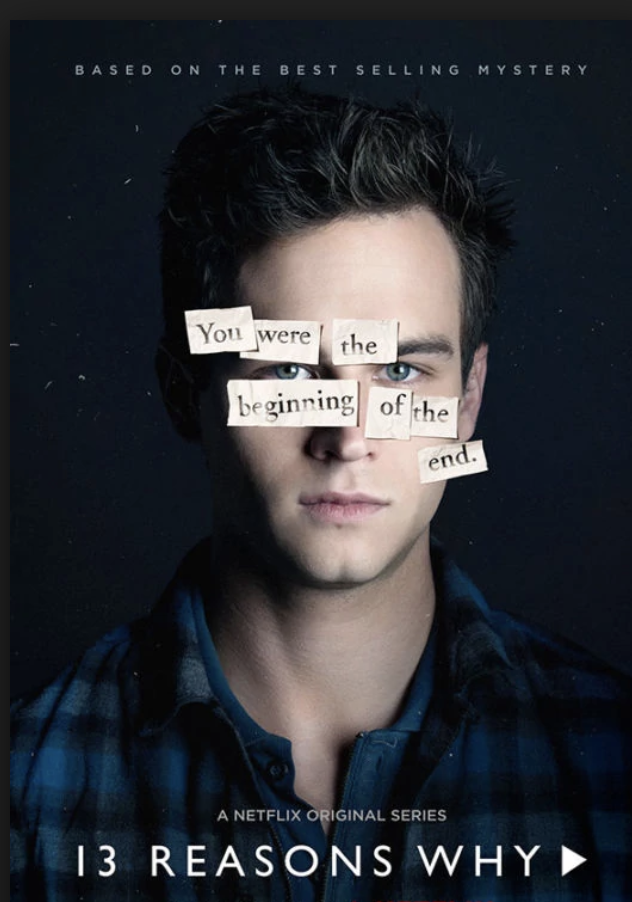 The first season was hugely controversial and there were so many articles and information being shared about the risks linked to young people watching it that I felt I needed to contribute my voice to that discussion.

This is what motivated me:

“I couldn’t help but notice that majority of the articles that warn of the show are written by concerned parents, teachers or experts.

As if, once again, they need to step in and tell us what we can and can’t handle.

As a young person and a suicide survivor, I fall into this Red Zone.

The category of people everyone is worried about“.

The second season was released in May and the media storm that appeared before its release did not seem to be sustained once it was aired.

What was different?  Had it become less controversial?  Were we more prepared this time?

I wanted to put my thoughts together to explore the second season and why the series still matters.

You would think that producers would be hard pressed to make the hit show 13 Reasons Why more controversial, though it seems they have done just that. Whilst last season’s main theme was suicide, Season 2 largely focuses on sexual assault. I was an avid fan of last season however this time round I was left feeling raw. This season comes with a warning before the show and it is definitely warranted given the graphic depictions of rape.

It seems the crew of 13 Reasons Why heard our criticisms and finally painted Hannah in an unflattering light. The entire show is based around her suicide and the 13 tapes she left behind for the 13 people who contributed to her decision to end her life. Hannah was a victim of bullying; however, this season shows that she herself used to be a bully at her old school. Hannah is not a perfect victim and this is a good thing. No one is perfect. Everyone makes mistakes or does bad things. Bad choices are just a fundamental part of being human.

However, this did not mean Hannah deserved what happened to her. No one does. Suicide should never be justifiable. Imperfect victims are not less deserving of our help.

Clay, oh god don’t get me started. Every time he is on screen it’s just whining and ‘me, me, me’.  For some reason, Clay deems Hannah’s suicide as his loss and solely his loss. Everyone is so busy comforting Clay that they cannot deal with their own grief. Clay seems to me to be an extremely selfish character. And yes, whilst his pain warranted, it is not more important than anyone else’s.   Alex and Jessica were her friends and knew her a lot better than what Clay did. Zach dated Hannah for an entire summer. Clay was in love with her yes but barely knew her. He was in love with the idea of her. Then when it came out Hannah slept with Zach, Clay wants to throw in the towel and has a tantrum because his dream girl naturally had other romantic interests throughout her life.  Wailing “I don’t even know who she is anymore”. Of course you bloody don’t Clay, you barely knew her to begin with. Clay essentially slut shames Hannah because when he found out she had had sex she was now somehow devalued and less deserving of justice in his eyes. An appalling attitude that is all too common towards women, particularly with survivors of sexual assault.

One thing I struggled to understand was the mother’s relationship with the kids who had essentially driven her daughter to suicide. She was furious with the school and was fighting tooth and nail against them in court to get justice for her daughter. Yet when it came to the people who actually bullied her daughter, she was kind and motherly. It makes no sense. Would a mother actually be able to forgive and help those who had destroyed her daughter’s life? My mum definitely wouldn’t. Forgiving would be difficult enough, let alone giving them advice and comforting them. Yes, she comforts them (Hard to believe, I know).  The mother is an incredibly complex and amazing character. Up until this point she has been so realistic.

Speaking of unrealistic, why the hell are these kids not involving parents or the police? The teenagers seem to be trying to solve things themselves and it is clearly doing more damage. It is not a good message to send. Telling an adult about issues, particularly ones as serious as bullying, suicidal thoughts, rape or attempted murder is massively important. Finding that ‘trusted adult’ may not be easy for some people but that does not lessen its importance.

However, at the end of the day it is a TV show, so being wholly realistic would not be as “exciting” to watch.

Jessica’s story gave us insight into the issues surrounding rape culture in schools and universities. Slut shaming, sharing nude images and sexual assault are things many girls unfortunately experience at the hands of their classmates. We have continuously been taught (or conditioned)  “boys will be boys” and that the responsibility to prevent these things relies solely on the girls. I remember being 11 and all the girls in my year group were taken out of school for the day to learn about self-defense and rape prevention. Whilst we were learning about how to navigate a dangerous world for women the boys were playing outside. I could hear them playing rugby completely carefree whilst inside the girls were being taught how to gouge the eyes out of a man on top of you. Yet almost a decade later, nothing has changed. How much more should women endure before men take responsibility in prevention?

Consent is not a woman’s issue; it needs to be taught to everyone.

Jessica’s story is a hard pill to swallow and is triggering for victims. My friend and sexual assault survivor was deeply triggered by the show. Naturally she was reminded of her own experience and this was very upsetting for her. However, when I asked her about the show itself she said that she’s happy it’s out there. Things don’t change if we shy away from the truth.

Tyler’s brutal rape was absolutely unexpected and horrifying. It is definitely the most controversial scene in the entire series.

Tyler is brutally beaten by a group of boys and raped with a mop handle. This scene left me in tears and I didn’t sleep that night. But I still think it was important to show a male rape victim, as their needs to be a conversation to stop the stigma of male sexual assault survivors. It was also important in the sense that it highlighted the fact that rape is not always sexual. It’s a violent, despicable act that is about power over the victim. I was surprised and deeply disturbed to learn that these types of assaults are all too common in US high schools and wondered how much of an issue it is here in NZ.

It’s abundantly clear that bullying can reach horrific heights. More education needs to be implemented in schools to prevent violence of any kind.

Last season started a deep conversation around suicide. It seems that this season, the show is using its influence to start a different conversation on another pressing issue; sexual assault. Whilst I had many issues with this season I still believe that this show is breaking boundaries and helping society as a whole. It has forced us to reevaluate how we treat victims of sexual assault, how schools handle bullying and how we educate our boys on consent.

Season 3 has been given a green light and I am interested to see what issue they tackle next.