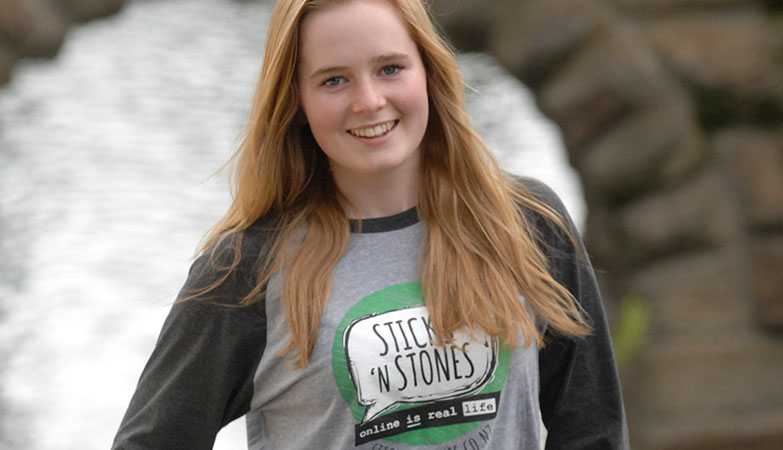 An insight by the talented Singer/Songwriter Janie Shaw

I have been a part of Sticks ‘n’ Stones since it began, one of the first members and someone keen to get    involved. When I was offered the chance to take on the music side of the group and write a song I  was all for. I  write songs all the time, sometimes it’s easy enough to whip up a song in fifteen minutes so I was totally in my  element.

However I was used to writing the stereotypical heart break love song because those were the kind that  somehow came naturally.

The topic of Cyber bullying was one I  wanted to tread carefully, and was going to be  a new challenge for myself but I was so overly excited it didn’t take long to come up with a tune and some lyrics.

We wanted to aim for a song that would put across the message of cyber bullying but I didn’t want a ‘pity song’ or something with ‘plain as day’ cringe lyrics. I wanted it to be more subtle. Most of my lyrics   are very un-explanatory and have many meanings, but aren’t obvious. So in typical Janie style I wrote the song “City Lights” which could be about anything. There are a few hinting lyrics in their that lead us to think it could be about bullying but nothing obvious.

I was worried about my amateur guitar skills and didn’t want them to pull the song back but after some talk with other members of the group it was decided that a very stripped back acoustic version was what we were aiming for.

In Queenstown last year I got my first opportunity with the song and putting myself out there and a recording was made for the local radio. We had the set back of a minor cold but hearing my song on the radio the next morning on a dead silent bus (doesn’t happen often with the Omakau school kids) was the best feeling. Nerve racking but amazing.

The recent Bully series on Prime T.V. was a three part series with a show on Cyber bullying which we feature in. City Lights is the credit song.

Unfortunately it was not till April  this year that we were able to properly record the song and an extra that could sort of relate to teenagers and the troubles they have. It isn’t as related to the cause but does connect. Finally recording these songs was awesome. We are hoping they will be on iTunes by the end of the year if we are lucky, which would be amazing.

Check out the Live version of City Lights Song after the introduction from Henry and Margot on More FM by clicking the PLAY triangle below,