It is often the unexpected things in life that can be the most memorable. That has been the case for us in Dublin. When we left New Zealand we had no idea that we would get to go and meet with some of the team at Facebook in Dublin. It came about via conversation during our meeting in London with the Diana award. They work with Facebook to facilitate a youth board; which you can apply to be a part of.

Every year Facebook hosts the youth board for one day and supports them to put projects in place and take action within their own schools and communities. The board comes to the offices in Dublin, where they take part training, find put about the work FB are doing and give them feedback on their policies and products.

Sticks n Stones already has a relationship with Facebook New Zealand and Australia, this has been an amazing relationship where we worked together to develop the Hit Pause, then post campaign!  Facebook also supported us to undertake our co constructed youth survey in Central Otago in 2015.

After the Diana Award told us all the details about how the youth council works and that there was a Facebook office in Dublin, we were eager to know more. We emailed Facebook and asked if it would be possible to meet up with some of the Irish team.

We knew that on such short notice and Facebook being a pretty busy place that this was unlikely, but you don’t know if you don’t try! The crew at Facebook in Dublin replied saying they would love to meet with us… The unexpected happened!  Yusss!

So today we found ourselves at Facebook! They found their way into my heart pretty quickly. We had been offered free chocolate and lollies before we even left reception.

We spent almost an hour talking to two of the INCREDIBLE team. Julie and Cara are amazing and do awesome work for Facebook, it was really interesting to hear about their roles, the direction FB is taking, the innovation and ideas being developed and so much more!

We also had the chance to find out more about how the youth board works, their focus on safety, how they value young people’s ideas and contributions as well as life online and the problems and issues we face in our countries. We talked about everything from reporting, to plans for the future, to how to bring internet to countries that don’t have access to it.

We were extremely interested in if there was potential to set up a youth board in New Zealand and Australia, like there is for the UK and Europe. We are excited to take this idea back to New Zealand and see what can happen. We were so impressed with Facebook’s willingness to listen to youth voice and the value they place on it. They are doing some pretty cool things and I am excited to follow them in future.

It is fair to say that this meeting was the highlight of this trip. The potential to give youth a voice from all over New Zealand and Australia would be amazing for both countries.

What do you think? 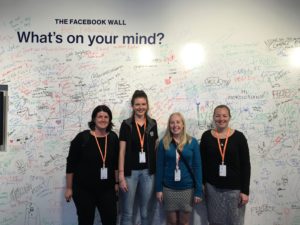